Beyoncé drops nine albums a year.. meanwhile I can’t get another single from KING. [No shade! I just wanna hear more!] Their sound is just ethereal and fresh-yet infused with nods to the more soulful, old school r&b. The sisters of KING are so beautiful and super talented, producing and playing instruments as well as harmonizing their […]

END_OF_DOCUMENT_TOKEN_TO_BE_REPLACED

Originally posted on TheOriginalBlackWoman:
Mark Twain said, in effect, that when a country enslaves a people, the first necessary job is to make the world feel that the people to be enslaved are sub-human. The next job is to make his fellow-countrymen believe that man is inferior and then, the unkindest cut of all is…

END_OF_DOCUMENT_TOKEN_TO_BE_REPLACED

Last year, in order to get over my long anti-artmaking funk, I pledged to create something daily for 100 days in a row. It started out as a chore. I was uninspired. Annoyed. Frustrated. Feeling washed up + inadequate and wanted to throw all my sketches away.. But by the end, I was doubling, tripling, […]

END_OF_DOCUMENT_TOKEN_TO_BE_REPLACED

I’m definitely enjoying adulthood more than ever. I hope you can say the same. So many people look forward to the weekend or next month or their next vacation or next summer instead of finding and creating ways to enjoy the now. I agree that there should always be something to look forward to, but it should be a daily occurrence! There are so many faraway places on my bucket list and I don’t see why I can’t reach them all in my lifetime. But until the time comes, I make it a point to find closer, much cheaper ways to venture.

This weekend I went to Heritage Park in McDonough, GA, a city just south of Atlanta and north of Macon. It was hot as bleep so we didn’t stay too long, but I got some cool photos and learned a little history that I found pretty interesting:

Ola Schoolhouse Kids of all ages learned here in one room. Apparently this was normal in rural America before the 50s. I just can’t imagine.

Detached Cookhouse This one I found the most interesting. So the kitchen was always at risk of catching fire[which it still is!] so it was separate from the living quarters. Just in case it did, the family wasn’t completely at a loss. But how annoying would going back + forth be on a rainy/snowy/hot/crispy cold day?? 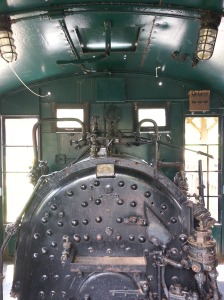 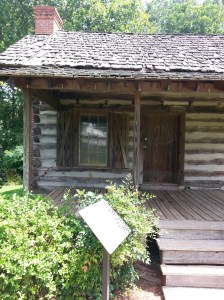 181-year-old “Settlers” Log Cabin I’m assuming they didn’t have too much money or land because it was so small! But the placard states that a ten-person family used the house just to rest because they played and worked outside most of the day. Although it wasn’t mentioned, this could have quite possibly been slave quarters.

There’s also an on-site community garden with flowers, fruits and veggies. {Although I don’t get why they call it community if they ask you not to pick the produce or flowers?} Supercute, right?? And the bees helped this sunflower look like a smiley 🙂

sidenote: Walking under party cloudy skies and 90+ degrees, slightly hungry and very sweaty, my sister was like “just think, our ancestors had to work in this all day! EVERYday! We have to be, like, the strongest people on earth.” Agreed. So I shut my spoiled mouth up from complaining about the weather. I enjoyed my little outing despite the heat.

It’s a pretty cool spot if you live in/near the area but I wouldn’t go as far to say make it a point to see it. There’s regular park stuff like walking trails and a playground as well as a real helicopter, a veterans’ museum and veterans’ memorial if you’re into that.

Make it a great week! As always, thank you for reading + subscribing!

“deodorant adventures” It started in like fourth grade with Teen Spirit. I then graduated to Secret. . …had a loooong love affair with Dove.. Eventually learned the dangers of aluminum and started using Tom’s. I love Tom’s. But on my quest to find a small and/or Black-owned funk-defier, I recently moved on. So now it’s […]